You have no items to compare.

Welcome to Waisting Away!

You have no items in your shopping cart.

Product was successfully added to your shopping cart.

Was the $19K Madonna Corset Sold at the Auction a Fake?

This entry was posted on 1st August 2017 by Admin. 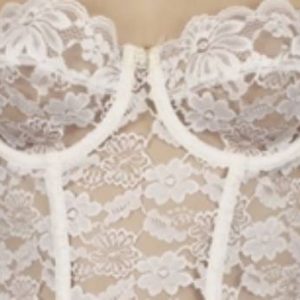 When the auction site GottaHaveRockAndRoll put up a corset purportedly worn by Madonna on the block, they did not foresee the kind of controversy and hullabaloo their action would generate. The site had laid the claim that the corset had been worn by Madonna during her "Like a Virgin" album cover shoot. The auction site received a top bid from a buyer who made a pledge of $19,294 for the Madonna corset.

However, things turned topsy-turvy when Maripol, a designer who was part of the shooting cast of the cover, claimed that the corset that had been put up for sale was an absolute fake. The designer was adamant that the corset offered by GottaHaveRockAndRoll, not the same one that the artist and Mage had used during the shoot of the "Like a Virgin" album cover.

By making these claims, the artist put the authenticity of the iconic white lace piece that the auctioneers had offered into question. Maripol authoritatively insisted that she be very familiar with the corset worn by Madonna during the shoot. She confided to some media houses that she had designed the corset that the superstar wore on the cover of "Like a Virgin". She went ahead to challenge anyone to compare that photos of the two pieces side-by-side to see the subtle difference between them. Her confidence, Maripol explained, was borne out of the fact she had sewn the original corset herself.

On the contrary, the auction organisers, GottaHaveRockAndRoll, insisted that the corset on offer not be a fake, but the real deal. On its part, the company contended that it had bought two corsets from Macy's and that the one that had gotten a bid of $19K had been used both onstage and in the album cover photo shoot by the iconic singer. The controversy generated by the scandalous back-and-forth threw a spanner into the works. The $19K anonymous bidder demanded to have a second, closer look at the corset that they had bid for.

Keen observers were quick to point out that this was not the first controversy that the auction house has been embroiled in. Madonna had filed for a court order to have the auction about 22 items that the company intended to put on the block halted. The memorabilia included Madonna's items worn satin panties, a hairbrush (that had strands of Madonna's hair), and a breakup letter penned by the late rapper, Tupac Shakur. The personnel at GottaHaveRockAndRoll seemed undaunted by this action, and they were still hoping to put the disputed items on the block at a future auction event. However, Maripol explained that this would not happen, as Madonna did not want anyone to have her DNA without her consent.

As with all scandals, a good number of people were quick to take sides. There were those who firmly believe that the corset that was offered at the auction was a fake; that it was different from the one used during the photo shoot of "Like a Virgin" album cover. They were of the opinion that those who claimed the two were the same had gotten it wrong.

One such argument was being propagated by a lady whose work brought her near superstars who have a fondness for corsets. She said that Madonna is wearing two items on the cover of the album. She has the white floral corset â€“ the crux of controversy-and over this, she is in a white mesh. The white mesh was cut to go over the corset. The mesh seems to have been cut to size as it perfectly covers the corset. At first glance, this makes the corset to look quite different. However, the lady added, zooming on the photos of both the auction corset and the one on the album cover reveals the truth. The pattern of the corset under the mesh shows that the corset is not the same as the one that was bid for $19K. The floral pattern is similar, but the position and size of flowers are different on the two corsets. On the auction corset, the flowers are set differently from those on the album cover. The lady opines that Madonna must have worn the two corsets, but that they are not the same.

Another expert, who believes that the two photos do not depict the same item, further supports the above thought. In his words, the first corset could have been worn when the Madonna performed the title of the "like a virgin" track at the 1984 MTV awards. The second corset could have been worn during the album cover photo shoot. Considering that the photo shoot happened about two months after the MTV event, it is likely that the corsets were similar, but not the same.

Maripol, the corset designer, was infuriated by any suggestion that the two items are the same corset. She was particularly incensed by the claims by a GottaHaveRockAndRoll representative that what was sold on the auction day was the same corset used by Madonna during her performance. Maripol insisted that this be a blatant lie, as there was only one corset, which she had sewn. She expressed her anger that the company had duped somebody into paying over $19K for a fake.

Maripol is seen by many as a reputable authority in such matters. Born in France, Maripol has worked as an artist, designer and is a former director of Fiorucci - a world renown Italian brand. Many people, therefore, feel compelled to accept her word when she insists that the corset sold at the auction was a fake.

In spite of being legally ordered to remove the 22 Madonna's memorabilia from the auction, organisers of the auction site lauded the exercise as a success, having realised about $750,000 by closing time. However, their future sale of the Madonna items was put in doubt after the Darlene Lutz, Madonna's aide, vowed to seek the intervention of the Supreme Court in New York and reclaim the items for Madonna.

More experts have since come out to explain the matter of the corset worn by "The Material Girl". The bottom line that the corset pictured on the Site's website looks distinctly different. Indeed, a closer look will reveal that it has a floral pattern that is subtly, but definitely, distinct from the one on the album cover. Additionally, the white lace corset on the website has more straps - which are missing from its counterpart from the album cover.

This entry was posted in Corset 101, News and tagged Madonna, News on 1st August 2017 by Admin. ← Previous Post Next Post →